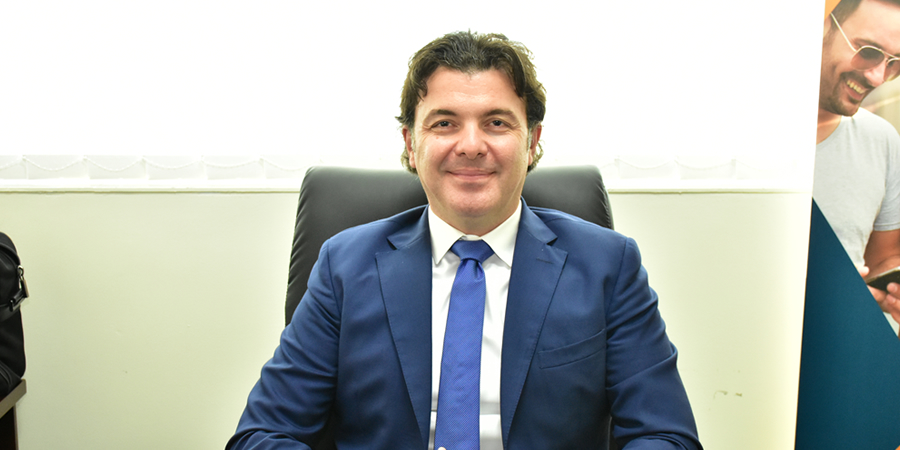 US enterprise MATRIXX Software is addressing the technology requirements of operators on a global scale - and has become a key enabler for service providers that are seeking digital transformation in an effort to enhance its operational efficiency and create new business revenues and models.

MATRIXX has enjoyed phenomenal growth in the Middle East market over the last number of years, since entering the region in 2015. Its success in the Middle East is largely down to the role played by Ali Harfouche, Vice President, & Head of Sales, MEA.

Under his dynamic and innovative leadership MATRIXX has enjoyed rapid growth over the last two years - and has delivered digital transformation for a number of major operators all across the GCC.

In a brilliant interview, the charismatic Harfouche explains how MATRIXX’s cutting-edge technology has enabled operators to transform their existing operating models, and outlines the key differentiators between the company and its competitors.

In addition to this, the VP and Head of Sales for MATRIXX in MEA, illustrates the huge growth the company has enjoyed globally since 2017, his own roles and responsibilities within the company - and its strategic plans for the next twelve months.

Can you tell us more about the history of MATRIXX Software, and what services the company provides?

MATRIXX software is a Silicon Valley company, and it’s a relatively new enterprise that was founded around 10 years ago. The CEO and founder of MATRIXX Software is Dave Labuda. He was the co-founder and CEO of Portal Software, which was the leading billing company in the 90’s. In 2008, when the iPhone was launched, people realized that this device was going to change the world, and it did. So at that time there was a realization in the industry that billing and CRM would no longer work in this new digital era. Portal Software was sold to Oracle in 2006, Dave and his team decided they needed to build something different to address the new challenges. So this digital transition is primarily where MATRIXX Software came from. All these engineers started working on creating a new product which became known as the MATRIXX Digital Commerce platform. This platform was built over patented technologies and introduced into the marketplace around 7 or 8 years ago and has been evolving year on year, which has provided MATRIXX with huge commercial success globally during this timeframe.  MATRIXX Digital commerce platform is not an enhanced BSS that competes with legacy vendors on features and functions, it is just different.

Digital transformation is disrupting and reshaping major industries all over the world. Can you outline to us how MATRIXX Software is helping telecommunication operators to reinvent themselves in order to become leaders in the new digital economy?

Telecom providers have embarked upon a number of projects historically over the last ten years with legacy vendors in an effort to address digital transformation and transform their architectures and business. However, this has proved to have been very complex and expensive, and it hasn’t yielded the results the operators wanted. The legacy systems weren’t really designed to operate in such an environment. Traditionally, telecoms were designed to work with shops and call centers and it’s so difficult to change that and transform it in a short period of time using same technologies. You have to change people, processes and technologies. MATRIXX comes from a technology background and is a technology vendor, so we can address the technology problem for service providers very efficiently and effectively. We’ve created this Digital enablement platform, and the way in which we help operators is that we deploy our platform using configurations only to connect their network to their consumer screens covering all journeys needed. We do that within few months and with minimal integrations to the legacy architecture. So basically in a very short time, Telecom providers can embark on the journey with us and they launch their Digital products and brands on MATRIXX which was designed for real-time digital experience that’s always on, always precise, and always agile. Your relationship with the operator really becomes the mobile app. We think about it as ‘Uberizing’ the telecommunications industry in every way possible.

MATRIXX has enjoyed phenomenal success in terms of creating a foundation for the enablement of next-generation IT architectures for rapid transformation. In your opinion, what is that differentiates MATRIXX from its competitors.

If you look at our competitors today, it’s mainly in the BSS space. They’re large and very respectable companies that did a great job in the telecommunications industry. However, the point is that what they’ve done over the last 30 years wouldn’t work anymore in the new Digital ecosystem. They’re still successful when it comes to traditional BSS, but by going digital they have to redesign their products again which is very difficult for them at this stage. The difference between MATRIXX and the competition in the market today is, that MATRIXX, didn’t look at the competitors with an attempt to create a better product, we created a different product. We didn’t create a billing system or a CRM system with new features, functions and flexibilities, because we believe that was the exact problem. We came with a completely different approach and with a product that addressed market challenges. We kind of gambled on our vision and took a risk with it and it worked. We were selling to a market that didn’t exist. The market wasn’t there we were trying to create the market. Telecom providers saw the results we were achieving and telecom providers specifically in the ME region are very smart and they want to be No.1. They’re very competitive, so it was easy for them to realize the benefits of what our product could enable them to do. In addition to this, there was also the element in which a lot of operators had already tried digital transformation and were not very successful. The programs they embarked upon in the past didn’t get them where they wanted to be, it was too complex, expensive and took far too long to implement.

What sort of response did you get from operators when you first approached them with your product, bearing in the mind that the market at that stage did not exist?

They were very defensive. You’re approaching an operator and you’re basically challenging the way they’ve done business for the last 20 years. I mean it’s fair to say that nobody would easily accept this. However, we’ve now got over 20 customers globally. In the Middle East, we have four of the leading customers and normally what we’ve seen is that this requires visionary CEO’s and CCOs. It is a CEO initiative. It’s not something that the billing team decides to do overnight. It’s actually the telecom provider deciding to change their business model and the way they do business, so it has to come from the CEO and his CCO. It has to be driven and sponsored by these executives. We have seen this trend coming out very strongly globally and also in the Middle East.

Can you outline to us what your primary roles and responsibilities are as VP, and Head of Sales, MEA for MATRIXX?

I started in this region about three and half years ago, and I was the only person here in the Middle East. It was a one-man show at that time. It was a very exciting journey, and I was the person tasked with the responsibility of leading the business development and sales. I started to develop relationships with new customers and thereafter I began to recruit people in an effort to expand our operations here in this region. Today, we now have over 30 people in this office, so year-on-year we’ve been growing at around 500% which is incredible. This region is the fastest growing market globally for MATRIXX Software. When the company first started there was over 50 people, and now it’s grown to over 200 - and it is continuing to grow fast because the market really sees the value and understands what MATRIXX is. In terms of my responsibilities in this region I cover the Middle East and Africa and we’ve now got a big sales team established along with a strong regional delivery and support teams. We’re expanding very fast, but my primary responsibility is looking after the entire MATRIXX business in this region. I’ve got to continue to grow the business and go into new marketplaces.

Can you tell me about some of the global customers MATRIXX is working with?

MATRIXX has over 20 telecommunication customers globally. The early adopters were Swisscom,Telstra in Australia, and Vodafone in New Zealand. So we had those early adopters about five years ago, and then we started to build from there by evolving our product and listening to the Market needs and our existing customer base. However, over the past two years we’ve witnessed a huge demand and growth. We were talking to few customers every year and then in 2017 these engagements just grew exponentially. So to name a few of our customers today starting from my region, Ooredoo Oman, Zain KSA, Ooredoo Kuwait, Hutchison (5 countries in Europe and Asia), Verizon USA, Teleena, and many other s2017 and 2018 were very promising for us and we’re very confident that 2019 will be an awesome year for MATRIXX in MEA.

What are the objectives and goals for MATRIXX Software in the next twelve months?

MATRIXX is coming with patented technologies so the company started with a lot of heavy patents in the technology space and then we built a platform at the top. This is something that is very unique in the market globally. We understand the operators and the telecommunications environment. Going digital in telecommunications is not as easy as going digital with Uber for example, because you’ve got millions of subscribers and billions of interactions from the mobile app. So you need a completely different way to address that, and you need this high performance technology to achieve this and this is where MATRIXX comes in. We’ve done that very well so far, but now we’re going to the next level. We are going to invest in many other areas to make our platform as complete and as independent from legacy systems as possible so Telecom operators will have an end to end platform for their Mobile consumer and Enterprise businesses among others. From the organization perspective we’re still growing the region. We’re establishing offices in Morocco, Kenya and later in South Africa, so the African market will also be a big focus for MATRIXX in the next twelve months. The product that we work with is not designed for a few hundred thousand subscribers. It’s really designed for hundreds of millions of subscribers. There’s a big need in Africa, it’s obviously not as mature as the Middle East Market, but there’s a huge demand there for the patented technology we have built. They’re very sensitive to cost, so running those legacy systems is costing them a lot of money and they need to start looking for alternative solutions. The philosophy of MATRIXX is successful delivery. There is no way we can fail on a single project. We can’t afford that, we’re a small company and we are extremely focused, we do one thing but we do it very well. We expand based on the successes we deliver.